The Walla Walla Public Library’s Big Idea Talks series concludes with Walla Walla and the Future of Food on Nov. 7. 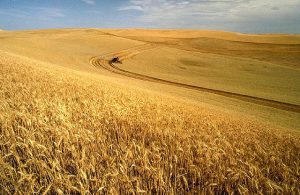 Walla Walla and the Future of Food will explore the role of the region in the global food system, specifically focusing on its wheat production.

Big ideas, it turns out, can draw big crowds. Beth Hudson found that out back in February, when professor Don Snow came to Walla Walla Public Library to talk about Iroquois community planning.

Snow’s discussion, and each of the subsequent lectures in the library’s Big Idea Talks, have nearly filled the library’s main reading room, with at least 60 and sometimes up to 80 comers.

“People kind of want to go to school again,” says Hudson, the library’s director a co-founder of the talk series, “but in a non-threatening way.”

The Big Idea Talks series led off in March with environmental humanities professor Don Snow, discussing the Iroquois tradition of “seventh generation” planning, in which group decisions were weighed by their impact on humans yet unborn. Later editions touched on backyard conservation, Latino integration into the Walla Walla community and — coming November 7 — the “eat local” sustainable food movement.

The series spun off from the library’s own winter reading program, a kind of community-wide book club that encouraged Walla Walla residents to read a specific book, then attend a discussion about it led by a local educator— often a faculty member at nearby Whitman College. Hudson and Whitman philosophy professor Julia Ireland collaborated to launch a program that would be similar, but more freewheeling – about concepts that extend beyond book covers.

The planning started late in 2012 — after the most grant programs that might have funded it had closed their application cycles. But a Spark Grant from Humanities Washington gave it the needed infusion, helping the library and Whitman College arrange and promote the events.

The effort also solidified ties between the library and Whitman College, which had been looking for ways to cooperate on programs.

The talks are marked by roughly forty minutes of interaction and discussion between presenter and audience. (“People are really wanting to talk about these subjects,” Hudson says, “so that’s been a really popular part of it.”) Ireland acts as moderator.

“Libraries are a place where the whole community can come together and explore alternate ideas, not just the ones perhaps most common to them,” Hudson says. “You can develop ideas, refine ideas, discover how other people feel about things — and you can look back from a historical standpoint and see how this particular issue has been addressed over time.”