Washington State Poet Laureate Elizabeth Austen recently finished a 12-day road trip. She plans on travelling to all 39 counties in the state as part of her two-year tenure.

Tell someone you’re going into the woods alone and they’ll story your head with trailside cougar attacks,
cave dwelling misogynists, lightning strikes, forest fires,
flash floods,
and psychopaths with a sixth sense for a woman alone in a tent.

From “The Girl Who Goes Alone” by Washington State Poet Laureate Elizabeth Austen.

CHELAN – She started writing poetry just after she learned to walk and write. That was it. Walk, write, poetry. She’s been in the arts ever since.

At first, Elizabeth Austen was a trained classical Shakespearian actress, but at some point in her “early 30’s” she decided to leave the stage and become a poet. Her poetic philosophy is a simple one, “I discover what it is I have to say in the process of writing,” she said during a recent phone interview.

“I do not sit down with an agenda.”

Austen says when she writes she is “following my pen” and states she is influenced by her acting training when on stage reading her poetry, but is not trying to be dramatic.

Like Shakespeare, she says that “language is delicious in the mouth” and intrinsically musical.

Her first influential poetic inspiration was poet Jack Myers whom she studied with while earning a bachelor of fine arts degree in theatre at Southern Methodist University in Dallas. Some of her poems are specifically written for performance, such as the above quoted “Girl” and others do best on the printed page. 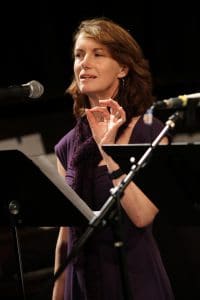 Austen recently finished a 12-day road trip which included the Chelan Library. She plans on travelling to all 39 counties in the state as part of her two-year tenure as Washington State Poet Laureate. Austen plans to visit libraries and community centers in Douglas and Okanogan Counties sometime next spring or summer.

One of the turning points in her poetic career came a few years back when she was commissioned to write a piece for the Richard Hugo House in Seattle, a non-profit community writing center. That’s when she wrote “The Girl Who Goes Alone” and, she says, “the sense of who I am as a writer, changed with that poem.”

The poem is about risk taking and was favorably responded to by “both men and women;” exactly what Austen wants as part of her mission as Poet Laureate – to be able to reach adults, of both sexes.

“My aim is to reach adults,” she said.

Austen will spend most of her readings in public libraries, some schools, community centers and tribal centers during her pilgrimage to bring verse to rural, urban and points in between.

Austen is in the “wilderness” of Washington … just like the girl who goes alone in her poem. 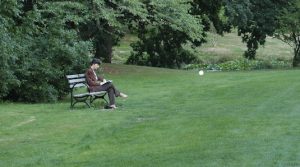 Austen at the Seattle Arboretum in 2012. | Photo by Fat Yeti Photography.