Humanities Washington was proud to join cultural organizations, elected leaders and citizens from across the state to celebrate Washington State’s 125th birthday in November. 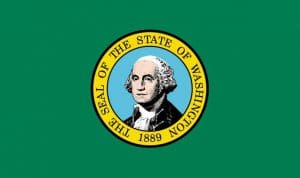 Many events took place throughout the date to honor our state’s 125th birthday.  The fourth floor of the Legislative Building featured exhibits by Humanities Washington and more than 20 other Washington-based arts, heritage and government agencies. 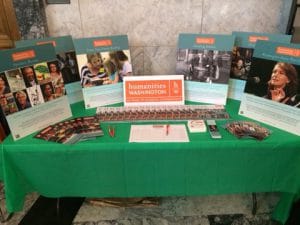 The 1889 Washington State Constitution was also on display.

A celebratory program kicked off at 1:00 p.m. in the Capitol Rotunda. Following formal recognition of Washington veterans, a Marine Corps color guard posted the colors and members of the Total Experience Gospel Choir sang The Star Spangled Banner.

Former Secretary of State Ralph Munro served as master of ceremonies for the event. He was both charismatic and stylish in 1889 period dress, complete with a stovepipe hat!

More than 100 Washington youth took an oath to preserve the state’s time capsule and to recruit a new generation of “Capsule Keepers” in twenty-five years.

The highlight of the day was a re-creation at 3:09 p.m. of the telegram delivery from Washington D.C. announcing official statehood. On November 11, 1889, the 23rd President of the United States, Benjamin Harrison, signed the proclamation admitting Washington to the Union. In honor of the milestone, a new exhibit, Washington 1889: Blazes, Rails & Year of Statehood, was unveiled.

Festivities concluded with guests enjoying healthy portions of a five-foot long cake made in the shape of Washington. For added authenticity, portions of the cake’s ‘Cascade Range’ were constructed with extra mounds of buttery frosting.

The Washington State Historical Society and the Office of the Secretary of State co-hosted the event, which was sponsored by a grant from WSECU. Additional donations were provided by Wagner’s European Bakery & Cafe, Johnson-Cox Co., Crystal Springs and the Foss Waterway Maritime Museum.

For more information about the celebration, visit www.sos.wa.gov or search for #WA125 on Twitter.