Students at a one-room schoolhouse in Ojo Sarco, New Mexico, 1943. Credit: Library of Congress. Back To All Blog Posts

When Public Schools Were Considered Vital to Democracy

Americans used to think free public education was a cornerstone of a democratic republic. What happened?

“A republic, if you can keep it.” Those were the words Benjamin Franklin supposedly used when he emerged from the Constitutional Convention and was asked what kind of government the Framers were proposing.

For America’s founders, public education was essential to keeping the republic. Thomas Jefferson famously proclaimed that of all the arguments for education, “none is more important, none more legitimate, than that of rendering the people the safe, as they are the ultimate, guardians of their own liberty.” He proposed an ambitious public education program for Virginia, but his plans never reached fruition during his lifetime.

Other states were more successful, however. By the 1820s and 1830s, a growing number of Americans were arguing that schools must be free, supported by taxes, and made available to all children. By the Civil War, most white children in the North attended public tax-supported schools, and the numbers were rising in the South as well. But those ideals had limits: racial segregation in the North meant that fewer African Americans had the same access and, it goes without saying, enslaved people were denied access altogether.

Americans at the time considered public schools vital for preparing new citizens for participation in a democracy. Moreover, at a time of rising immigration, they were seen as necessary to bring together an increasingly diverse society. “Our public schools are the most democratic institutions that this peculiarly democratic country affords,” proclaimed E. Hodges, superintendent of schools in Fond du Lac, Wisconsin, in 1854. Schools should treat all children equally, educating them not just in the “rudiments,” but instilling them with the knowledge necessary for citizenship. In a society divided by religion, ethnicity, party, and wealth, public schools would “harmonize the various discordant elements that are found in society,” because students would “sympathize with and for the other.” In public schools, diverse people would come to think of each other as fellow Americans.

To their advocates, public schools served public functions. They would prepare citizens and, by bringing together all kinds of Americans, they would help forge a national community.

It was not just immigration but growing economic inequality that concerned advocates of public schools. John Pierce, the new state of Michigan’s superintendent of public instruction, celebrated public schools where “all classes are blended together; the rich mingle with the poor, and are educated in company . . . and mutual attachments are formed.”

Horace Mann, Secretary of the Massachusetts Board of Education and the so-called “founding father” of American public education, considered bringing together rich and poor to be one of the most important functions of public schools. If rich parents “turn away from the Common Schools” and choose to send their kids to “the private school or the academy” (the chartered schools of their era), then the poor would end up with a second-class education. To ensure that students, and their parents, intermingle, “there should be a free school, sufficiently safe, and sufficiently good, for all the children within its territory.”

But in the past several decades, Americans have begun to question these ideals. Confidence in public education has dropped off a cliff since the 1970s, with only one-third of Americans saying they have a “great deal” or “quite a lot” of confidence in the nation’s public schools, compared with two-thirds during the 1970s. At the same time, support for alternatives like charter schools and private school vouchers has risen. 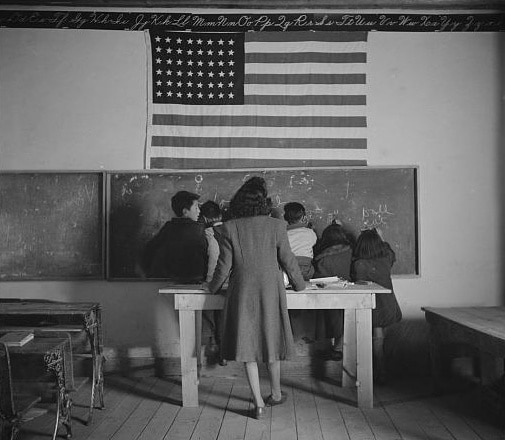 To their advocates, public schools served public functions. They would prepare citizens and, by bringing together all kinds of Americans, they would help forge a national community. Today, however, we seem less certain of that project. For many American leaders, schools serve economic rather than civic purposes. In the words of the Common Core State Standards, graduates of public schools must exhibit “college and career readiness,” a less lofty ambition than the prior stated hopes for public schools. In contrast, during an earlier effort to create national standards during the first Bush administration, the National Education Goals Panel argued that higher academic achievement would prepare students for “citizenship, further learning, and productive employment.” It argued that readiness for the job market was only one outcome of a good education, and it came after education’s impact on citizenship and human beings.

If our leaders today emphasize economics, other Americans question the public schools’ historic role of forging a common nation out of a diverse population.

On the left, some advocates of multiculturalism worry about efforts to foster a common culture. They instead urge schools to offer culturally-specific programs to minorities. On the right, many evangelicals and members of other religions have argued that secular public schools threaten their children’s faith, so they advocate using public funds for private and religious schools. Supporting these families, our current Secretary of Education Betsy DeVos has devoted much of her public career to enabling parents to choose schools that reflect their own values instead of bringing all Americans together into public schools.

But what about common American values? Can we, as citizens, even agree on what those values are? Should schools bring diverse people together to foster a shared civic culture and to promote American ideals? And do we want to move beyond the language of college and career readiness to emphasize once again the ideals of citizenship? If so, how do we do so in a diverse society?

None of these questions are new. They were the kinds of questions that Americans confronted after the Revolution when they built our first public schools. But these questions have, if anything, become even more pressing for us today.

Johann N. Neem is a Professor of History at Western Washington University and author of Democracy’s Schools: The Rise of Public Education in America. He is currently presenting his free Humanities Washington Speakers Bureau talk, “What Happened to America’s Public Schools,” around the state. Find an event here. This essay is adapted from a 2017 talk at the University of Oklahoma.