You Mad, Bro? A Conversation About Race and Sports 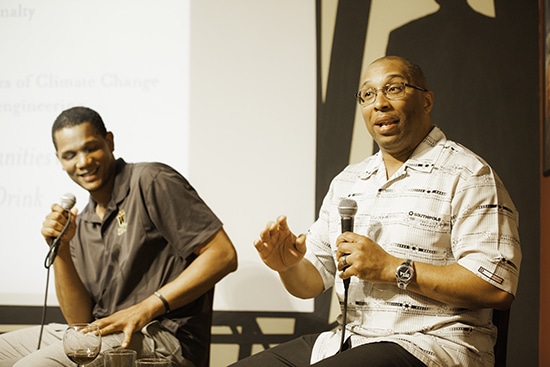 Behind the seeming unity of teams on the field and their fans cheering from the sidelines, a deep division exists.

While the white population in the US is currently at 77% percent, most sports teams continue to be majority minority (68% of NFL players, for example, are African American). How does this divide reflect larger issues about race? Sports can bring inspiration, life skills, and a sense of community, but also socioeconomic inequality, cultural pressure on some minority groups to be athletic, and a lack of financial literacy among many athletes who grew up in poverty (within five years of retirement, 60 percent of NBA players go broke). Sports represents, in the words of sociologist Eric Davis, “the best of who we are and the worst of who we are.”

Donald Watts on the pressure on African Americans to be athletic:

[As a child] I saw a lot of images of [African Americans] as professional athletes, and when you see that at a young age, that’s naturally what you grow up preparing yourself to be. […] What happens at an early age is that you develop an all-or-nothing, “It’s NBA or failure” mentality. I see a lot of that in the community right now when you look at the NBA. Don’t judge me because my math is off, but you have 32 teams in the NBA and 12 guys on each team. Out of those 12 guys on each team, let’s say 10 or 11 contracts are guaranteed. So you’re looking at an opening of about 30 jobs a year with millions of kids shooting for them. So any time you have an ideology coming out of cities for young people to feel like, “I need one of those 30 jobs or I’m a failure,” that can be a problem.

Donald Watts on how money has changed sports:

Since the Michael Jordan era, it’s gotten so capitalist. These guys make so much money that they become corporations. And their voice and responsibility to the community [is lessened]…They’re corporations attached to other corporations. They are no longer individuals who “made it,” so now they can speak freely. Like with the “hands up don’t shoot” deal: You had a couple guys wear those t-shirts and it was quickly—they didn’t suspend them a couple games or whatever—but they took those t-shirts off pretty fast…

One of the big discussions now is paying college student athletes. I kind of have a different perspective. I know that a lot of the for-profit sports pay for the nonprofit sports, and I would never want to see anything happen that would affect the opportunity for any male or female to go to college on scholarship because a football player is getting paid. The other side of that, when you think about paying a college student athlete, is that if you were to give a college student athlete say an extra $4,000 a year in cash, what is that going to result in? A couple more pairs of Jordans and some jeans? It’s not going to have the effect that paying them should have.

I really think that some of that money should go toward investing in them, investing in financial literacy, because a lot of them are coming to [college] without financial literacy, and [we need to help them] understand and see the value of their education. A lot of us, when we come out of inner cities or come out of any rural area, or any time when you’re coming out of a community where the same value isn’t placed on education, you’re not ready enough. I feel like there should be [college and financial preparedness] programs, similar to when you get drafted to the NBA or the NFL and they have rookie programs.

Fiscal literacy is a social problem. Race is a social problem. Sports are essentially a reflection of the best of who we are and the worst of who we are. And the fact of the matter is that a lot of the issues around fiscal literacy and financial literacy are lacking among a lot of young people, a lot of us in general. I think the fact that we don’t understand much about money is a contributing factor, but there’s also this understanding that it’s easier to exploit [young athletes] when you tell them, “Hey, this is your way to get here, to this success. This is your path to get to a better future.” And if that path is only sports and not a balance of sports and life and academics, then yes, you’re going to end up with the issues that 70, 80 percent of these young men who after three to five years are broke.

Eric Davis on abusive behavior off the field:

There’s nothing good about what Ray Rice did in punching his now wife in a hotel casino in Atlantic City. There’s nothing good about the situation of Adrian Peterson, [who] went a little overboard on whooping his four year-old son, getting a little bit over the top. […] Obviously these things get blown up because they are public figures. But I want to look at the reason why we think we can cheer on these guys to be gladiators on Sunday. We root for them to kill each other in the NBA. We’re rooting for them, saying “Why don’t y’all just take him out? Give him a clothesline, just take him out!” We root as fans for these guys to get hurt, for our guys to kill their guys. We use those terms. And yet, we don’t even question—but we wonder—why they don’t know how to control that emotion on Monday.

Editor’s note: Eric Davis is a member of Humanities Washington’s Speakers Bureau, and presents his talk “Rap 101: The Message Behind the Music” around the state. Go here for details.