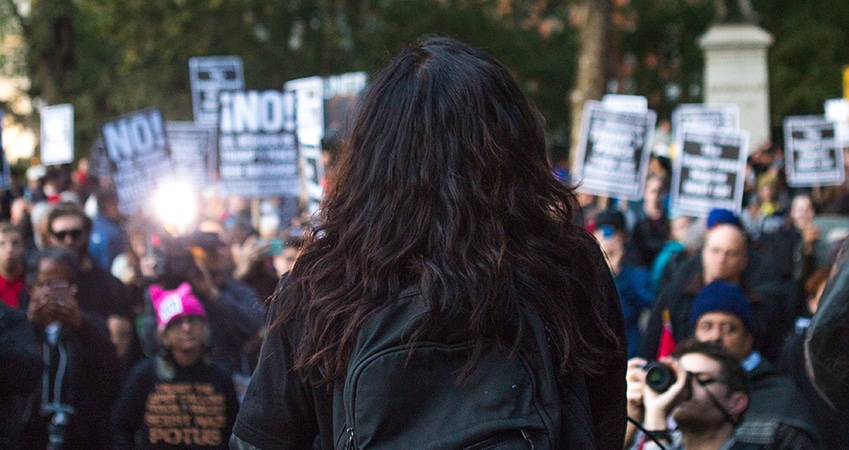 At the Miss America pageant in 1968, activists descended on Atlantic City to protest what they saw as the event’s objectification of women. Though the protesters only numbered several hundred, their ideas and outrage—and the widely televised reach of the event they disrupted—propelled the next wave of feminism to the national spotlight, resulting in major changes to attitudes and laws.

Exactly fifty years later women’s anger has taken a different form, this time focused less on public spectacles than private moments. It’s a movement calling attention to sexual assault, harassment, and similar abuses that often happen in the quiet corners of offices, big box stores, and movie studios. The #MeToo movement is emerging as the tip of a new feminist moment, a movement that also includes the Women’s March (considered the largest single-day protest in US history), and the unprecedented numbers of women running for office.

But as one of the organizers of the Miss America protest said, “I thought that the things we accomplished would stick—not that they would be always in danger.” Will #MeToo and other new efforts bring about lasting social changes, or are they mostly a hyped-up hashtag? Join us as we explore the last 50 years of women’s political and social power in America.

This event is part of “Since ’68,” Humanities Washington’s spring series of Think and Drink events in Bellingham, Tacoma, and Seattle.

In the opening months of 2018, gender and racial equity, the threat of nuclear war, mass protests, and deep political divisions are the subjects of intense debate in American society. But we’ve been here before—and in recent memory. The year 1968 saw widespread youth protest, a surge in feminist and Black activism, nuclear anxieties, the election of Richard Nixon, and the assassinations of Dr. Martin Luther King Jr. and Robert Kennedy.

Each event will explore the connections between 1968 and our present moment, focusing on one of three pivotal events: the Miss America protests, the publication of the Kerner Report on the troubling inequities between Black and White communities, and the signing of the nuclear nonproliferation treaty. How have those events shaped our current politics and society? Despite the drum beat of rage and alarm from the news and our social media feeds, are our lives fundamentally better now—safer, more equal, less anxious—than they were then? Or are we worse off, and once again on the brink of chaos? Join us as we examine the legacy of one of the most transformative years in American history.

Event is open to all ages. Registration is encouraged, but not required for this free event. Register here.

ONLINE: Heating Up: The Ethics of Climate Change