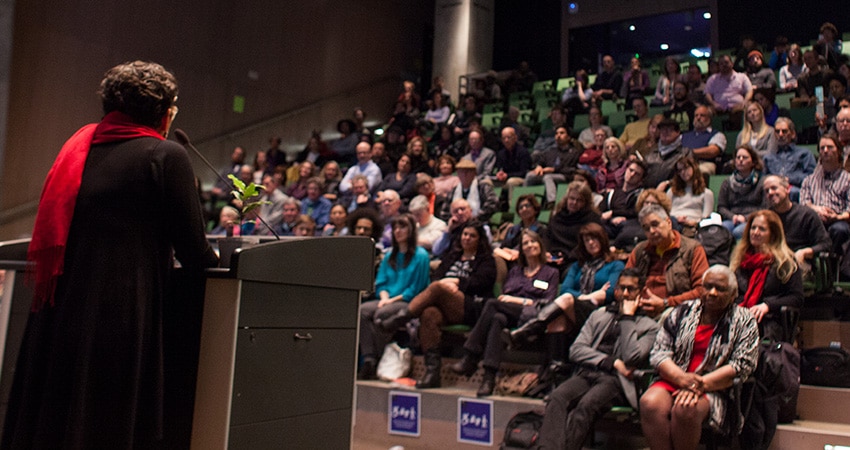 Connecting Washington to the power of poetry.

The Washington State Poet Laureate serves to build awareness and appreciation of poetry — including the state’s legacy of poetry — through public readings, workshops, lectures, and presentations in geographically diverse areas of the state. The appointed poet laureate serves a two-year term.

In April 2007, the Washington State Legislature passed a bill that recognized the value of poetry to the culture and heritage of the state by establishing the Washington State Poet Laureate. The poet laureate program is funded and run by Humanities Washington and ArtsWA, with the support of Gov. Jay Inslee. Poets can either self-nominate or be nominated by a third party every two years through an application process.

The current poet laureate is Claudia Castro Luna, who assumed the role February 1, 2018.

Castro Luna fled war-torn El Salvador for the United States at the age of 14 with her family, and went on to earn an MFA in poetry and an MA in urban planning. After working as a K-12 teacher, she became Seattle’s first Civic Poet, a position appointed by the mayor. In that position, Castro Luna won acclaim for her Seattle Poetic Grid, an online interactive map showcasing poems about different locations around the city. The grid landed her an interview on PBS NewsHour. She is the author of the poetry chapbook This City and the collection Killing Marías. She succeeds poets Tod Marshall (2016-2018), Elizabeth Austen (2014-2016), Kathleen Flenniken (2012–2014), and Sam Green (2007–2009). Learn more about past laureates here.

Read Castro Luna’s blog at wapoetlaureate.org, and follow her on Facebook and Twitter. Individuals and organizations interested in hosting Claudia Castro Luna for readings, workshops, classroom visits or other events can apply to host a visit here. Since Castro Luna’s term as Poet Laureate concludes at the end of March, applications are only being accepted for events scheduled for February and March of 2021. Information about applying to host an event with the next Washington State Poet Laureate will be posted in April of 2021.

The Poet Laureate program is run in partnership with:

Additional support for the Poet Laureate program provided by:

You are invited to a celebration of Rena Priest’s appointment by Governor Jay Inslee as Washington State’s 6th Poet Laureate. This very special event is organized and hosted by the Lhaq’temish (Lummi) Nation, Humanities Washington, ArtsWA (the WA State Arts Commission), and the Washington Center for the Book. Past Laureates Claudia Castro Luna, Tod Marshall, […]

Join Washington State Poet Laureate Rena Priest as she builds awareness and appreciation of poetry, including the state’s legacy of poetry, through public readings, workshops, lectures, and presentations across the state. Priest, a member of the Lhaq’temish (Lummi) Nation, is the author of Patriarchy Blues, which was honored with the 2018 American Book Award, and […]

How can the humanities help us through crises?

"As human beings, we look for common experiences and want to share our experiences—that’s what writing is all about. You tell someone a story and they try to relate that to their own lives—there's a communal experience. We're trying to puzzle out the meaning of the world around us—that’s what the humanities is all about."

Author, The Art of Racing in the Rain